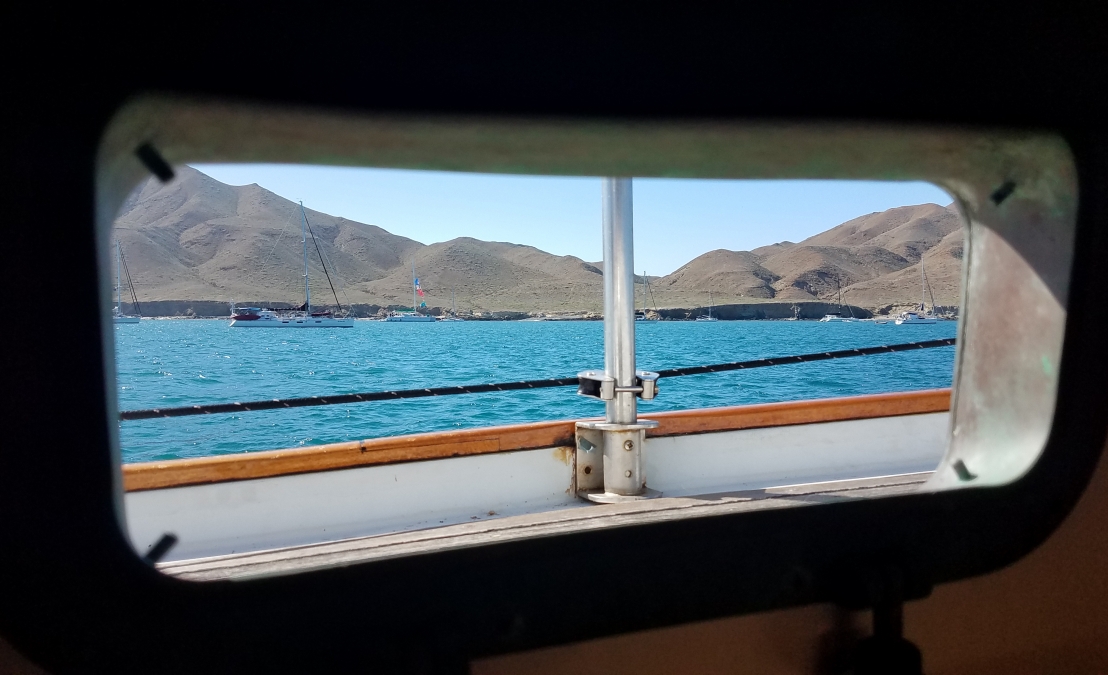 After a couple days of rest it was time for anchor up and out of the bay at 0700 as we continue further south down the beautiful coast of Mexico. We reviewed all of the weather options and again decided it was best to head off shore as far as we could so that we could catch as much wind as possible. By 815 am we had turned the motor off and had the spinnaker flying with a nice 10-14 knots of wind. We were having so much enjoyment with the consistent wind and sails that we hardly noticed the day passing .

Around noon  we cast out the hand line  and within 3 minutes had caught a yellow fin tuna. Within 5 minutes we had it in the fridge in fillets for dinner. About 3 minutes later we had a bite on the fishing line with a different lure and as it was brought it we were excited to see we had FINALLY caught a dorado. We were so pleased. We decided that despite having to sail all night we were going to grill the dorado on the barbeque as we sailed and just make sure we didn’t lose it overboard.

The winds stayed very consistent all day and into the  night with 10-18 knots pushing us along with the main and jib out. We noticed some small tears on our Jib and didn’t want to risk it shredding in the night so we took it down just as the sun set. We grilled the dorado  and we didn’t lose it and it was amazing. After dinner we again settled into our 3 hour night watch routines.

Anxiously awaiting a beautiful sunrise it became apparent that the day was not going to be that but instead a cloudy and overcast day. At this time  we are around 110 miles offshore the coast of Baja Mexico as we kept  chasing the wind.

We continued to sail. Our lithium batteries have lots of stored energy for us to use and at night time we go into energy conservation mode. All crew wear head lights to see what needs to be done both above and below deck, we have LED red floor lighting and a few LED red overhead lights we use. We turn off the fridges at night as we don’t open and close them much  as a way to conserve a lot of power. This in turn allows us some luxuries like using our invertor to run the toaster in the morning for our breakfast.

Around noon we began hearing reports on the VHF that there was a squall coming through. One of the larger boats in the fleet that also went way offshore reported they were getting bashed hard, had a microwave come flying loose and smash all over the inside of their boat. Based on that report and the other reports of people “shredding” their sails and spinnakers we decided to jibe and head inland more. This proved to be a good decision, although a rolling one. The seas were behind us now.

By early afternoon we realized we were going to sail right into / through the end of the squall. Winds increased to 25 knots with gusts up to 30 at times. We were surfing down large rolling waves as the wind and waves continued to push us east towards the mainland. There were many reports on the VHF of people getting hit hard with higher winds,  and experiencing thunder and lightning . We soon had a double reef in our main and a small amount of jib out and were still doing 7 knots of boat speed. We had a small sprinkling  of rain but that was followed with a  beautiful rainbow.

As night fell we had to decide whether to slow down and enter Bahia Santa Maria during sunrise or to keep going our course and enter at night in the dark. Most  mariners usually won’t enter an unknown  port at . We discussed this and decided that because we were part of the Baja Fleet, we could always wait and follow another boat in, or we could “hove to” outside the bay and wait until sunrise. We decided to go for it and then follow a Baja veteran boat into the bay. The moon was getting fuller and brighter after our very grey day and it was lighting the way for us to follow.

In the middle of the night there was a distress call from another boat. They had shredded their stay sail. They had also lost their jib off the furler and it had gone under their boat and then got sucked into the engine intake. This in turn had caused the engine to quit due to over heating. Luckily there were two boats close by that came to their rescue and assisted them through the night to arrive safely sailing into the bay to begin some repairs. We always take a more cautious approach to sailing and although it may take a little longer, we feel that we don’t need to risk having too much sail up to reduce in an emergency. I am not saying that others were less cautious, but it does depend on your risk tolerance for night sailing.

We crossed the finish line for leg two at 1246 am. We then continued to sail into Bahia Santa Maria (following a couple of other boats) and dropped anchor in the outer bay at 0400. We celebrated with a glass of wine ( we don’t drink while sailing) and then we all went to bed for a nap for a few hours.

We awoke a few hours later to sunny blue skies, blue water and a beautiful location surrounded by sail boats. It was as good as it gets.

We spent two great days at Bahia Santa Maria. We did our FIRST swim off the boat in the glorious waters of the bay. We visited with friends on their boats. We managed to do a very WET dinghy beaching as we caught a wave and got dumped sideways out of the boat. We did dome beach exploring, spoke with a local that had caught a shark and had lots of laughs!  We did some sail changes and some sail repairs ( on our spinnaker) and went to the best Beach party hosted by the Baja Haha organizers. The party was set on a bluff overlooking the bay and had a live band, lots of dancing, lots of food and a lot of very relaxed happy people!

What can I say except that I have good lighting and a great photographer. 😜
Don’t mind a strong wind storm when the wind is consistent. This is 20 hours of tracking on anchor. (The blue scribbles are where we have swung to ) Think we will sit here and ride this system out.
Not all sunshine and beaches 🤨
HAPPY NEW YEAR wishes from Colin and Julian, from a little island called salaradup in the San Blas.
The view from my hammock as I contemplate the end of 2022 and wonder what's in store for 2023.
This is our fourth Christmas since we set off on this adventure, and certainly the hardest part of cruising is being away from family and friends at this time of year. Here's wishing everyone a wonderful Christmas from the San Blas Islands.