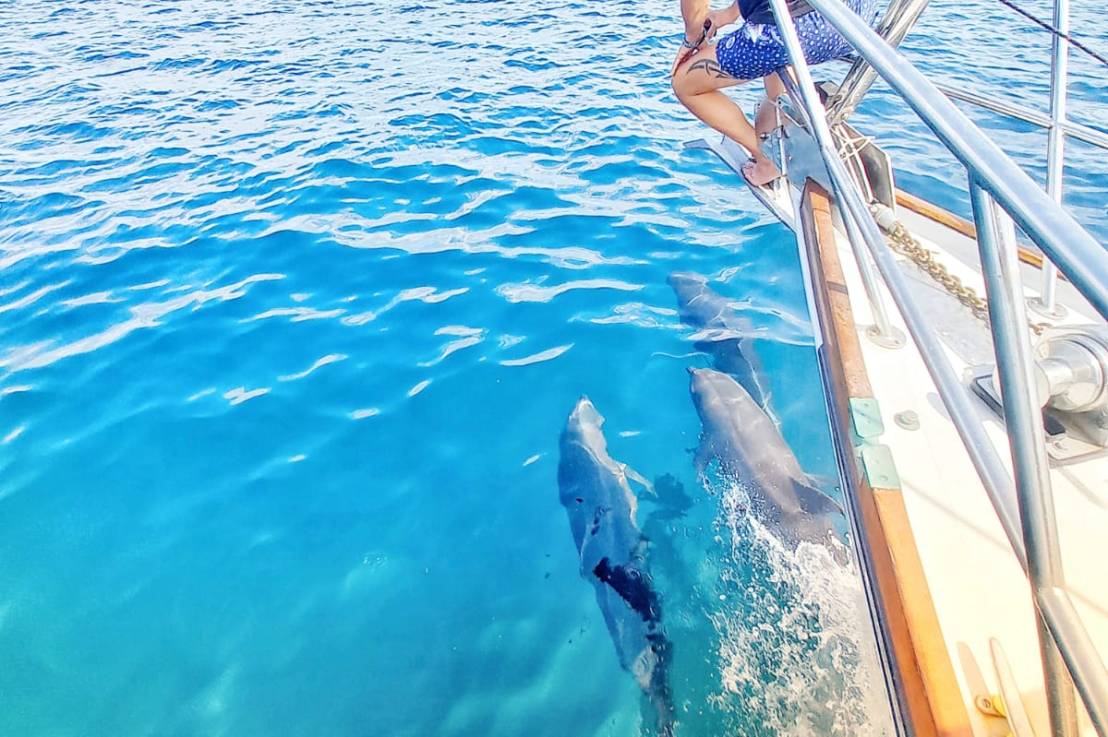 With the options of going south this year having been stymied by the pandemic, and the hurricane season fast approaching, the best option was to head back north to the Sea of Cortez for a second summer (off) season.

It was strange to leave ‘Paradise’ after a few months there, and stranger to feel like we were ‘back-tracking’ over a course we had been before. Nevertheless, it felt great to be on the move again. It was a short sail over to La Cruz, and we got well settled before the usual afternoon winds. With no intention of going ashore, we took a convenient spot towards the rear of the group of anchored boats. The group however, was much diminished from the large mass of boats that were here when we were last in La Cruz.

We enjoyed the evening, very pleased to be back in the breeze , and rocking at anchor.

We sailed off the anchor, using the motor just to avoid the few boats anchored close by, and then set about beating west towards Punta de Mita. Enjoying the sailing and the pleasant breeze, we managed travel over 21 miles, covering the 8 miles or so (direct route).

A motoring day up to Chacala. We were pleased to arrive back in this lovely town, but devastated to hear that the bakery was temporarily closed while moving to a new location. No pizza for us, but we consoled ourselves with cocktails at Chac Mool.

The swell here was greater than when we were here before. we spent three nights here, with our stern anchor set to keep the bow into the swell, out from the significant surf on the beach. The boat was pulling back and forth on the bow and stern anchors as the swell rose and fell, and we suspect this caused the stern anchor to set very deep into the sand bottom, giving us a really changing time trying to retrieve it …. and all just a little too close to the breaking surf! The result … much pulling, head scratching, and ultimately … a bent stern anchor.

it was a reasonable sail to Matanchén, and a strategic anchoring far from the shore to avoid the jejenes that bit both Colin and LeeAnne on our previous visit here. A brief one-night stop before our longer passage back to Baja.

The first day started as expected, with little wind and motoring to make progress, but as the wind filled in during the afternoon, we motor-sailed, and then finally had the engine off.

The following day we put up the spinnaker with good wind and were making great progress, but by mid-afternoon we were six miles ahead of Juliet, and, wanting to keep fairly close to them through the second night, we hung back to wait. By the time they caught up, the wind had got up nicely, and it continued to gain strength throughout the night. We had a reef in the main, and, with the stronger wind through the night we swapped to jib for the staysail. The sea got a bit more lumpy and it was quite the sporty night of sailing.

Always in these moments, with winds above 20 knots and a confused sea pushing the boat around, Boundless seems to just lean into the challenge, and it is a great confidence-boost to feel how comfortable the boat is under the circumstances.

The following day was good sailing, and as we approached the Baja Peninsula we were welcomed with dolphins in the bow-wave, which just always seems to make everything seem perfect again.

Our originally planned destination was Los Muertos, but after the strong southerlies of the last 24 hours we were beginning to question whether it would be comfortable … a quick exploratory trip in proved our suspicions to be correct; the two boats in there looked to be enduring fairly miserable conditions, and this was made even more clear as we turned to leave, pointing into the wind and the swell, and the boat slowed to 4 knots as we fought our way out of the bay. The trip around to the calm of La Ventana on the north side involved a further hour of motoring, but we finally found ourselves settled in the peaceful roadstead anchorage off the long sandy beach.

Leaving La Ventana we headed up the Caravallo Channel in flat calm conditions, quite the contrast to our other two experiences here. As we headed north we saw a mega-pod of dolphins working their way south in the channel, but a few turned around to join us for the ride for a while.

While we had not particularly looked forward to ‘going backwards’, being back in the crystal blue water of the Sea of Cortez was absolutely wonderful, and we felt ourselves very pleased to be back here, and excited to return to life in, and not just on the water, for swimming, spear fishing and snorkeling.

Wanting one more stop before getting into La Paz a radio chat with Juliet determined that we should head for Balandra Bay, to spend a day reacquainting ourselves with the beautiful Baja.

The following morning, needing a walk on land, after 5 days os so on the boat, we went with LeeAnne (and Bubba) to the northern part of Balandra and took a walk along the cliff-top, before heading off to La Paz.

With Marina Palmira having only one slip available, we were happy to let Juliet take that and for us to go into familiar Marina CostaBaja.

We spent nearly a week here, getting Sergio to fix the stern anchor and modify the swim ladder. We also set about getting new anchor chain, buying shade material, and of course, stocking up with cans of smoked marlin from Arámburo market.

That was a nice afternoon's work. An easy solar panel upgrade, swapping out our 550 watts of solar for 770 watts with replacement larger panels.
Great evening with friends old and new and awesome music at an equally awesome locale in La Paz
We just got back to Puerto Escondido after a pleasant 10 day cruise up to San Juanico/La Ramada (we missed you @svremedy). Swam a bunch, left our mark at the cruiser shrine, and treated ourselves by replacing our old sticky pack of cards with new and crispy ones.
Love these two so much. Thanks for wearing our sailing ‘kit” and your support for our crazy adventures.
The Sea of Cortez seems eerily quiet this time of year, we are the only boat at the usually popular Isla Coronados.
Leaving Vancouver, BC on a day sail on sv Watermark, with @bikingrealtor. It was lovely to be on the water again in the Pacific Northwest, and even more fun to be on the son's boat.