Log: A reasonably early start with the fog rolling over the hill in Sausalito, and efforts to get out before the tide change under the bridge at 8:30am.  A Grey day for sure and a long choppy motor out to Buoy #4 before making the turn south.  A highlight was the large whale that would have had issues with Scarlet had Nick not made a sharp left hand turn.

Heading south, sails raised and with the 8-10 knots of wind life improved significantly with some lovely sailing.  Scarlet Fire proving a little faster (no surprise), Nick and Johnna put in a reef and we enjoyed the buddy boating experience.  The wind faded as we got closer to Pillar Point, and we motor sailed the last section.  A turn around the two green buoys (Gong-Bell-Horn), and the water turned a lovely blue and we even saw a hint of the sun between the marine layer.

Fortunately, there was no room in the marina, and we were left with the buoys as another option, which turned out to be much the best way to go (especially at $11/night).  We took a trip to shore (4 persons in a 3 person dinghy with that sketchy, Honda 2.3hp outboard), got a coffee, some delicious fresh salmon, and headed back to the boats.

After a more than adequate dinner of salmon, tuna, asparagus, rice and salad, we embarked on what we later understood to be a futile exercise of trying to beat (never beaten) Johnna at Hearts.  After a ride home for Johnna and Nick in the dinghy (no Uber), it was to off bed. 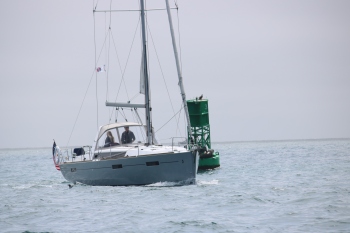 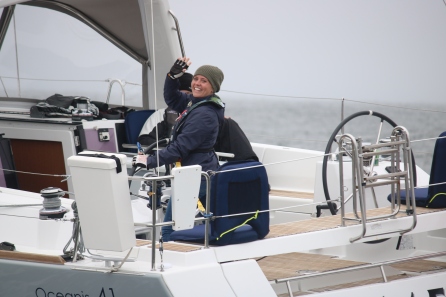 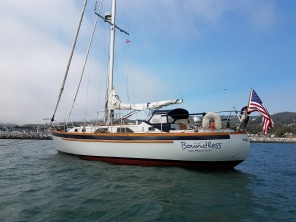 Log: After a full 9 plus hours of sleep, it was drag the dingy on the deck, and drop the mooring to head out into the Pacific swell.  With light winds from the northwest, it was an hour or so of motoring before we could get enough westing to set a course north (check the track and you’ll see it took a second motor west to get the final course).

The sailing was GOOD.  10 – 12 knots and lovely seas, and Scarlet Fire easily put some ground between the two boats.  Scarlet’s lead was secured once we turned east and fiddled with untangling the asymmetrical to get it up (we have to sort out a better system – it was probably a full 30 minutes).  Nevertheless, we had a brief spell of glory with the spinnaker set, barreling with increasing wind towards the Golden Gate Bridge.

Once inside the Gate, and enjoying the 25 knots around Cavallo Point, Scarlet Fire were hanging out waiting for us and a few final photos before heading back to the dock. 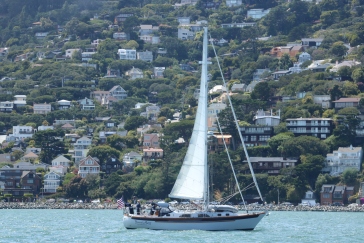 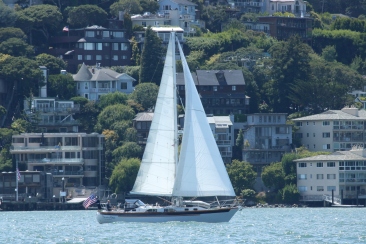 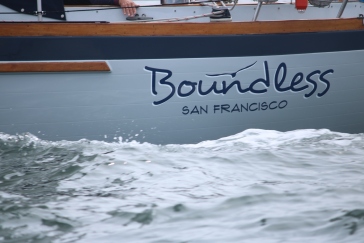 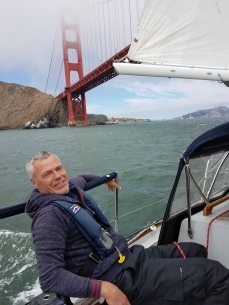 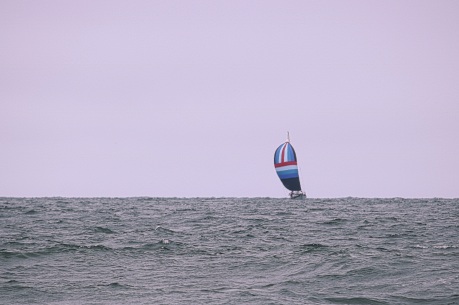