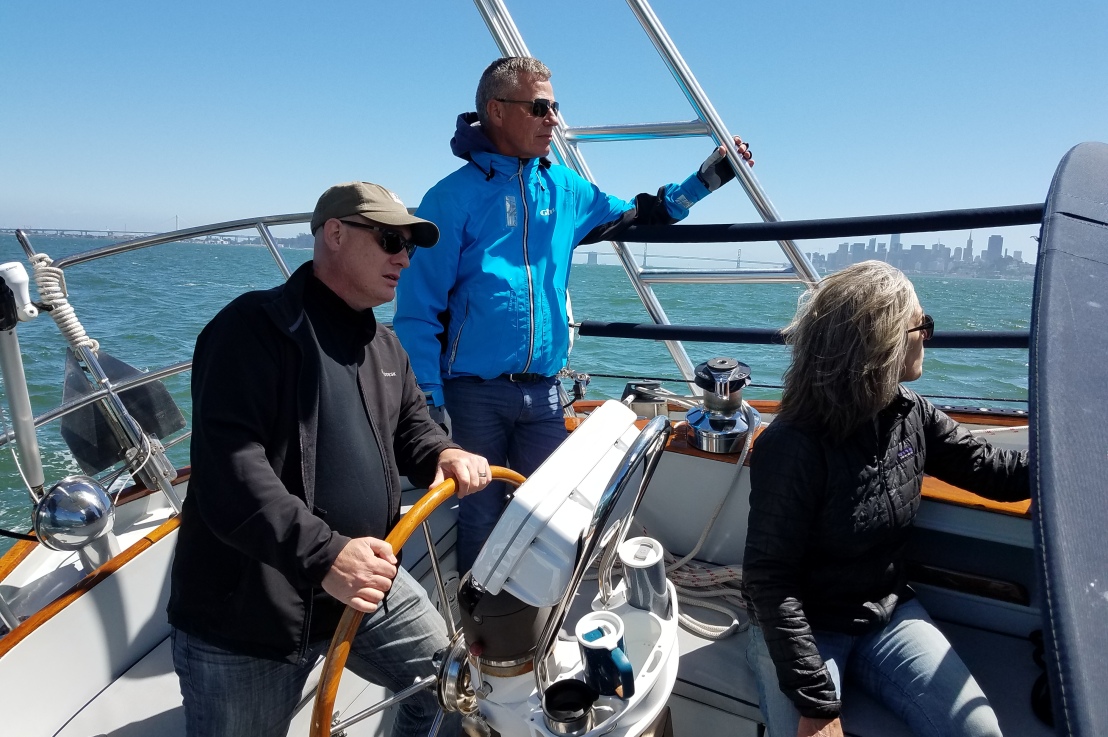 Well, the summer weather pattern is back … yea! It was bright and sunny, there was that icy San Francisco April through September chill, and it was blowing hard for the re-entry into the dock … yes, it must be close to summer. And … with the reduced wind resistance created by our new shiny varnish job (really?), we were flying along nicely.

Its always interesting having folks join us for a sail. Most people seem to have a pleasant enough time, but you can never tell if they are going to just enjoy a day out on the water, or whether they are going get attracted to the magic of sailing, and truly engage all the parts of running the boat. Sometimes one half of a couple ‘gets it’ and the other half is less thrilled. Liz and Scott were both in the ‘engaged ‘ camp, and seemed to catch the sailing bug (or at least faked it well).

After tacking across the Bay a couple of times, we realized the flood current was going to make a trip out of the Gate a challenge, and we turned to ‘go with the flow’ down Raccoon Straights. Took a nice phone photo of ‘Playtime’ a Beneteau 45 delivered to the owner a few months ago, and then hit some light air behind Angel Island; a perfect time for a spot of lunch.

After a Sowerby sighting in a boat from Modern Sailing, we also saw ‘Dream Catcher’, a Passport 42 from Alameda looking fine. Tacking into the now waning current, we completed a circumnavigation of Angel Island, getting Liz and Scott back in perfect time (we run a tight ship folks) to head to Easter dinner.

One thought on “Easter Sailing with Liz and Scott”